Prostate cancer is the most common cancer in men in the UK. It usually develops slowly, so there may be no signs for many years. In the UK, about 1 in 8 men will be diagnosed with prostate cancer in their lifetime. Every year 10,000 men die of prostate cancer (one an hour). Cutting edge research released this week has demonstrated for the first time that men with certain mutations in their DNA, their genetic code, are more likely to develop prostate cancer. The Institute of Cancer Research (or ICR) estimates about one in 300 men in the UK have mutations in Brca2 (or breast cancer 2 gene), which increases their risk. They also indicated that an annual blood test could help spot tumours early, when they are easier to treat. Most men will not know whether they carry the mutation in their DNA as it is not currently tested for. BRCA2 mutations are the same genetic errors that increase the risk of breast and ovarian cancer in women. The BRCA1 and BRCA2 genes were originally discovered in 1994 and 1995 respectively. This breakthrough came when a Cancer Research UK team (then The Cancer Research Campaign) analysed combined data from more than 200 families affected by breast and ovarian cancer. 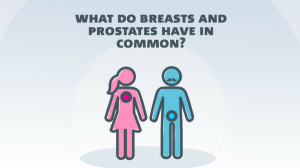 Their study narrowed down the search for BRCA1 and BRCA2 genes to a part of our DNA called chromosome 17. In the nucleus of each cell, our DNA molecules are packaged into thread-like structures called chromosomes. Each chromosome is made up of DNA tightly coiled many times around proteins called histones that support their structure. Chromosome 17 is one of the 23 pairs of chromosomes in our DNA. Just specifically in chromosome 17 there are roughly 1,100 to 1,200 genes so this pioneering research really was like looking for a needle in a haystack. Any one of these genes could have been the elusive breast cancer gene. The study nevertheless demonstrated the one specific gene that accounted for most of the families affected by many cases of breast and ovarian cancer and they called it the BRCA gene. Another piece of invaluable research the following year also identified a second BRCA gene. Both these pioneering pieces of research has led to a huge increase in understanding the epidemiology and treatments of breast and ovarian cancers. 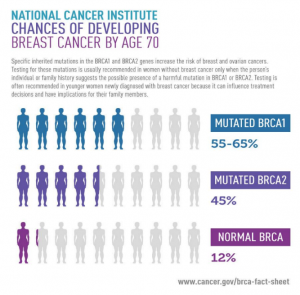 On average, by the age of 70, women with one of the alterations for BRCA 1 or 2   have about a 50 percent chance of being diagnosed with breast cancer and 16 percent chance of developing ovarian cancer. Men with an alteration have about a 16 percent chance of developing prostate cancer by the age of 70. However, it is also important to remember that family history helps to place an individual’s cancer risk in perspective. For example, family history will be most useful in determining risk if a carrier has multiple relatives affected with breast or ovarian cancer. In this case, a woman’s risk of breast cancer may be higher than the average of 56 percent.

The Role of The Movember Charity Organisation

In November is difficult to resist the obvious link with ‘Movember’. Movember, as a word, is what is known as a ‘portmanteau’. A portmanteau is a word blending the sounds and combining the meanings of two other words, for example motel or brunch. Movember, as most of us know, is an annual event involving the growing of moustaches during the month of November. This is to raise awareness of men’s health issues, such as prostate cancer, testicular cancer, and men’s suicide. It started in 2003 with a group of 30 young men in Melbourne who decided to grow moustaches for a bit of a giggle. The next year 450 men took part and they raised around £25,000 for prostate cancer research. The trend quickly grew into a global phenomenon and is now a major annual event. Now around five million people take part in at least 21 countries.

The Movember Foundation charity raises awareness and vital funds for institutions such as the Institute of Cancer Research (or ICR) which is a November centre of excellence. The Centre is also funded by Prostate Cancer UK and is a tri-partite collaboration led by The Institute of Cancer Research and involving University College London and Imperial College London. It is one of two Centres of Excellence in prostate cancer research in the UK – the second joint centre is between Manchester and Belfast.

How Common are the BRCA 1 & 2 Gene Mutations in Men?

As we can see by these investments, the funds raised are being well spent. The latest research released this week by the ICR looked at almost 3,000 men aged 40-69, with just over half carrying inherited mutations in either BRCA1 or BRCA2 with the others as healthy controls. The men were screened with a common test for prostate cancer called the PSA (prostate-specific antigen) test. The study found that the incidence of prostate cancer in men with BRCA2 mutations was significantly higher than in men with no BRCA mutations and that BRCA2 carriers were typically diagnosed when younger and had more substantial disease. There were no differences observed in men who carried BRCA1 mutations, compared to healthy controls. Prof Ros Eeles who led the study commented; “Our research shows very clearly that men with the Brca2 gene fault are at increased risk of aggressive prostate cancer and that regular PSA testing could go some way to improving early diagnosis and treatment”. She also comments that men with Brca 2 mutations were nearly twice as likely to have a severe cancer that needed treatment rather than simple monitoring.