This week’s article is about a fascinating new insight into why herniated discs (or Prolapsed or Slipped Discs) occur. Compared to other primates we are unique as we can walk upright on our hind limbs. We decided a long time ago that knuckle walking was perhaps not a good look.

Fossil evidence suggests that our earliest known ancestors lived in equatorial Africa 8-10 million years ago. It is surmised that at this time climate change meant that our food sources became further apart, and we had to travel further  to forage ( Deliveroo and Ocado were not an option). Longer distances meant that we required movement that was faster and more efficient.

Research from 2007 suggests that human walking used about 75 % less energy and burned 75 % fewer calories than quadrupedal walking in chimpanzees. So, evolution did the rest. But did it do enough? Our transition from four-legged to two-legged walking has had major consequences for our spines.

Unfortunately, as one author neatly summarised, ‘a common evolutionary issue is that susceptibility to disease is an unintended consequence of an advantageous evolutionary adaptation.’ In this case the unintended consequence may well have been a susceptibility to herniated discs. This is also and increasingly common issue which I have written about before. 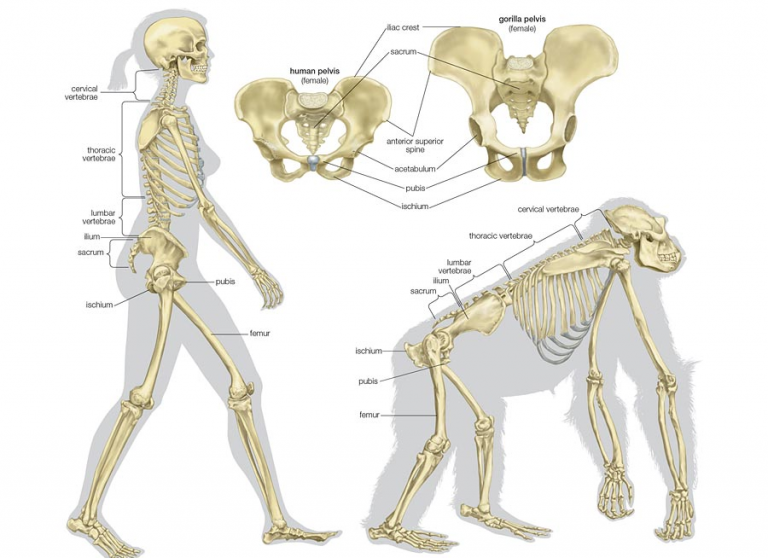 No other mammal walks like we do but unfortunately ‘going perpendicular’ has come at a cost. Many of the evolutionary changes that enabled us to walk are in the scheme of things relatively minor. It is likely that if we gave an engineer the problem of solving bipedalism, they would have invented a very different solution.

In an ideal world many of our spinal issues could be solved if only we could go back to the drawing the board when we on all fours. So, what did evolution change to enable the transition from all fours?

What Anatomical Changes Occurred to Enable us to Walk?

The chief evolutionary adaptations to enable us to walk occurred in our spines and pelvis. This was also of course facilitated by changes in the structure of our feet and leg length.  Our spines are all the more remarkable because they protect our spinal cord and all the associated blood vessels, yet they provide structural strength that dictates our body posture and enables us to walk; this is the same for both us and other primates.

For humans it has cleverly evolved distinct regions without jeopardising these basic functions although the adaptations are relatively subtle. Larger lumbar vertebra at the bottom of our spines have evolved to interact with our pelvis and lower limb. Both the number and size of the lumbar vertebra are unique to us when compared to our closest cousins the great apes and chimpanzees.

We have five comparatively large lumbar vertebra while they have only four vertebra which are also smaller. The greater number and size allow us to have a more flexible lower back. This then works in unison with our pelvis and upper limb during our gait cycle. Because chimpanzees have stiffer lower backs, they are forced to move their hips much further forward when they walk bipedally. 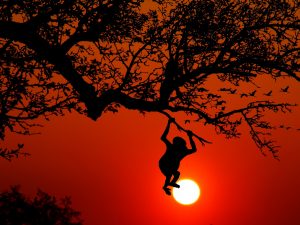 The pelvis became shorter, broader, and more bowl shaped.  This provided greater stability for walking and running.  Unfortunately, this also generated a narrower birth canal.  Consequently, giving birth is a more difficult and riskier process for us than for most other mammals.  We developed a broader chest that was flatter from to back to front, relocating the centre of gravity much closer to the centre of the pelvis.

All this is very important because we need to maintain balance when we walk. This is because we experience a moment of instability when we lift one foot off the ground as we transition through our gait cycle. 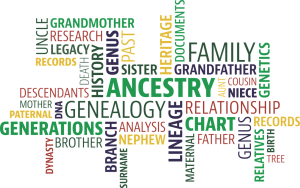 Unlike many primates, our arms are shorter and weaker than compared to our legs.  Clearly longer legs combine with powerful muscles and longer tendons to make us more energy efficient for driving our momentum forward. Although over short distances we can be outpaced by many other animals, we have fantastic endurance and stamina making us ‘persistence hunters.’

We were designed  to tire out individual prey by following them for many miles at relatively low speed, compared for example to a cheetah’s brief high-speed pursuit.

Our feet were once designed to effectively grasp and manipulate objects, but they changed shape to allow us to walk. Our  toes became shorter and our big toes fell into alignment. We now have a forward-facing big toe to provide extra final thrust when walking while apes have a sideways facing prehensile big toe to aid grasping. Our foot length increased, and we developed  a distinct arch, two key features in allowing effective support.

The human foot is uniquely stiff so that it enables forward propulsion, yet it also possesses sufficient elasticity to act as an energy store, recycling mechanical energy during locomotion. Our feet effectively recycle mechanical energy as we walk, contributing up to 17% of the energy required to power a stride as  tendons and ligaments stretch and recoil. So, what are the unintended consequences of all this and how does all this relate to herniated discs?

Have We Evolved Enough in Order to Avoid Problems such as Herniated Discs?

Many of our spinal problems are unfortunately unique to us precisely because of  the transition to walking. Although many of the anatomical changes which set us apart from other primates are unique there are obviously still flaws. Two studies from the same authors were published in 2015 and March 2020 and were published in the journal ‘BMC Evolutionary Biology’.

This research directly associated some of our common spinal  problems because we are too genetically similar to primates. The research team from Canada, Scotland and Iceland analysed the vertebrae of chimpanzees, orangutans and ancient human skeletons. The purpose was to correlate the relationship between the shapes of the vertebra in the spine with upright movement and spinal health.

The skeletons  helped provide information about how we evolved to become bipedal. Surprisingly, the study demonstrated that by coincidence or design there was no denying our ancestry. Evolution is not perfect, so even over many thousands of years we have not all adapted in the same way. Prof Mark Collard, from the University of Aberdeen commented; “our findings showed that the vertebrae of humans with disc problems are closer in shape to those of our closest ape relatives, the chimpanzee, than are the vertebrae of humans without disc problems.”

They concluded that herniated discs, one of the most common spinal pathologies, are linked to evolutionary shift. As most of us know a herniated disc is the same as a ‘prolapsed’ or ‘slipped’ disc. This can be seen in the MRI scan below. The white strip behind the vertebra represents the spinal cord and departing spinal nerves. The border between the vertebral bodies and spinal cord should distinct and congruent. Clearly the  herniated disc at the bottom vertebra of the spine is all too evident! 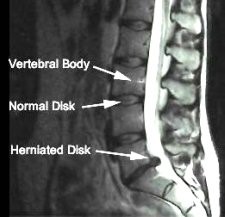 The incidence of a herniated disc is about 5 to 20 cases per 1000 adults annually and is most common in people in their third to the fifth decade of life, with a male to female ratio of 2:1. A herniated disc is when the nucleus of the disc breaks through the outer disc wall and exerts pressure on spinal nerves causing  pain like sciatica.

The nucleus material not only presses directly on to the spinal nerves, acting as a space occupying lesion, but the material also acts as a biochemical irritation further exacerbating the issue. As some of us are only too aware this can cause a great deal of constant unremitting pain!

The study we mentioned identified that for those people who experienced disc herniation, their actual physical shape of their vertebra is closer to those of our primate ancestors and less adapted to the stress of bipedalism. They determined that people with disc herniation are at the ‘ancestral end of the range of variation’. Prof Collard further suggested: “Our study suggests that the pathological vertebrae of some people may be less well adapted for walking upright”. So, perhaps we should be careful if we call someone a ‘cheeky monkey’!