Muscle pain in the neck – the main muscle groups

As you can see below there a lot of muscle groups in the neck. We as osteopaths spend years studying so we know the attachments and actions of all muscles so we can be precise and effective in our treatments.

Knowing the actions of the muscles of the neck, we can ask you to contract and engage the target muscle so that it palpably hardens and is easy to identify. This way we know the exact position and depth of the target tissue. 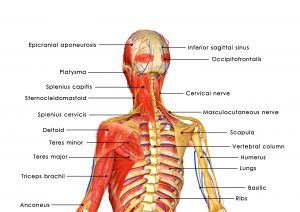 There are many muscles in the head and neck anatomy: in excess of 80-90 pairs of muscles if you include the soft palate, tongue, pharynx, larynx, nose and throat. They all are have vital tasks, including movement of the head and neck, chewing and swallowing, speech and facial expressions.

The neck muscles, including the big muscles like sternocleidomastoid and the trapezius are responsible for the gross motor movement in the muscular system of the head and neck. They move the head in every direction, pulling the skull and jaw towards the shoulders, spine, and scapula. 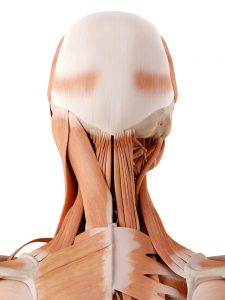 Repetitive strain injury in the neck

In the modern workplace environment, we can expose ourselves to long periods of postural strain that impose heavy loads on arms, shoulders and neck. This can be due to spending long hours on a computer or behind the wheel of a car. Although we may be initially unaware of the effects this will lead to an increase in soft tissue tension in the neck and shoulders especially. Eventually you can experience mild discomfort but when you have finished work  your symptoms will improve. This is the first stage of symptoms and may last for several weeks or longer.

An osteopath can help suggest simple modifications to your workplace. Gentle massage to the tight muscles and manipulation to loosen the joints of the neck, thorax and back can relieve the build-up of muscular tension that may over time lead to headaches.

The purpose of ligaments is to act like rubber bands and restrict excessive movement in the neck in flexion, extension and rotation (the word ligament comes Latin ‘ligature’ meaning bind or tie). Therefore, in the event of a road traffic injury, these are the structures most often injured. 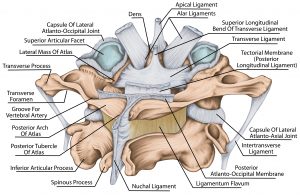 In the event of a road traffic accident (RTA), the prognosis is usually good and most often there is no permanent damage. Sometimes aches and pains can persist but it does not always indicate that it is serious.

An RTA usually affects the muscles that determine our overall physiological range of movement. The facet joints in the neck, responsible for helping to control rotation, are also usually be affected. It is also possible to get sensations in the arm caused by minor nerve root irritation. Chest pains can result from a seat-belt running across your chest and it is not uncommon to also experience lower back pains as well.

Ligaments and natural degeneration of the spine

Previously we described a ligament as a tough band of tissue that restricts excessive movement and connects two bones. The spinal ligaments obviously connect the vertebrae of the spine together and provide stability for posture and spinal movement of our necks.

One of the most significant ligaments is the ligamentum flavum (flavum means yellow and this is really is the colour of this specific ligament). The ligamentum flavum is a short but thick ligament that connects vertebrae together. Its elasticity serves to preserve our upright posture. 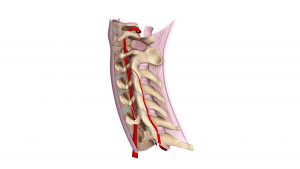 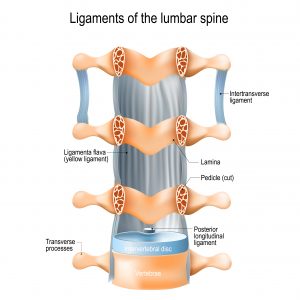 This ligament, however, can become inflamed due to stress on the spine and this often occurs in people over the age of 50 due to the natural degeneration process of the spine.

As the structures in the spine degenerate stress increases on the ligamentum flavum. When this happens, cells in the ligament become inflamed (hypertrophy) and begin to ossify or thicken. This increase in size and decrease in elasticity occasionally combine to reduce the area available for nerve roots and the spinal cord to pass (spinal stenosis).

This degeneration can happen at any level of the spine but is most commonly experienced in the lumbar (lower back) and cervical (neck) regions.