Typical symptoms: Varying levels of discomfort and tenderness surrounding the kneecap. This pain will be typically exacerbated by uneven terrain when running or by motions such as squatting.

Runner’s knee is known as Patellofemoral Pain Syndrome (or PFPS). This is the single most common running injury, accounting for up to 20% of all injuries.

When the kneecap (or patella) moves with your thighbone (or femur) while you run, the constant friction and stress imposed can serve to irritate the patella and its immediate anatomy. 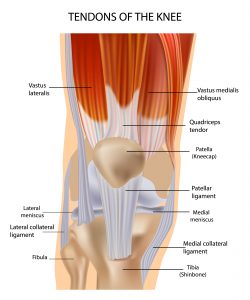 Some of this friction is also because the patella serves as a pulley for one of the largest and most powerful of muscle groups in the body: the thigh muscle (or quadriceps femoris). 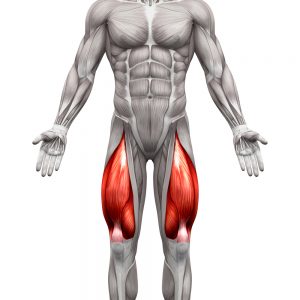 Once irritated, a common characteristic of patella pain is varying levels of discomfort and tenderness surrounding or behind the patella itself. This pain will be typically exacerbated by steps or hills, uneven terrain or by motions such as squatting. It can also typically becomes progressively more intense during running.

Pinpointing a single cause for runner’s knee can generally be difficult. Biomechanical issues are important to consider. Key issues are patella alignment, condition of the cartilage in the knee joint (affects shock absorption) and the arches of the feet allied with pronation and supination. Muscular causes such as tight hamstrings and calf muscles can cause pressure on the knee and weak thigh muscles can also affect tracking of the patella (the patella runs along a groove as you move).

Key to prevention and treatment is immediately reducing workload and cutting back on mileage to enable healing to commence. Having your footwear checked so that it is appropriate with your foot type and gait is also important (a thorough gait analysis may be necessary) and a visit to our podiatrist can determine whether orthotics may be necessary to help control foot movement. Also, strengthening your quadriceps will improve patella tracking and stretching your hamstrings and calves (foam rolling) will help prevent over-pronation (inward rolling of the foot). Strengthening of the hip adductors and external rotators should also be added to this.

In some instances, resolution may be quick after cessation of activity but in general, with an exercise programme, it may take 4-6 weeks.

Typical symptoms: Caused by twisting of the knee when the foot is planted resulting in pain, stiffness and swelling and sometimes accompanied by locking or ‘clicking’.

The meniscus is a C-shaped rubbery pad of cartilage that acts as a shock absorber as it helps to cushion and stabilise the knee during movements. Effectively it helps distribute the body’s weight across the knee joint and essentially enables the leg bones to fit together properly (or gives the joint congruity). 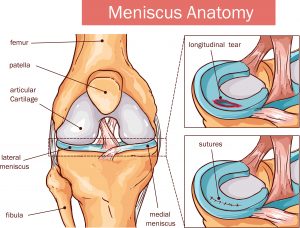 There are two menisci in each knee, namely the medial meniscus on the inside of your knee and the lateral meniscus on the outside. Twisting when the foot is planted can cause a tear in the meniscus; this subsequently creates an uneven surface that serves to irritate the knee joint by generating pain, swelling and stiffness. Often there is also a catching or ‘locking’ sensation in the knee. It is also worth mentioning tears can occur as a consequence of ageing, as the menisci can become weaker and thinner.

Minor tears frequently settle spontaneously without treatment and this is particularly true at the outer edge of the meniscus where there is a good blood supply and therefore better potential for healing, especially in younger patients. 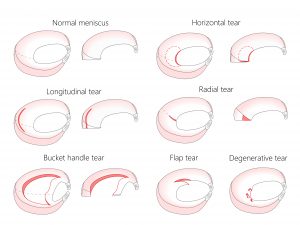 Overall, it is advisable to avoid and/or reduce rotational forces across the knee during healing and undertake an exercise programme to maintain muscle power and stability. Typically, older patients with minor degenerative tears may also require only a period of conservative (non-surgical) management (although more prolonged).

The majority of more profound meniscus tears may require surgery. It is often the case that repair may be inappropriate and a preferred option may be to remove the torn fragment; this would be typical in the inner two-thirds of the meniscus where blood supply is lacking. This being the case, only as much as necessary will be taken in an effort to preserve shock-absorbing capacity and minimise the chances of arthritic changes later in life. If surgery is necessary, your knee will be immobilised until healing is complete and then a programme of rehabilitation exercises will be needed to restore function and strength.

Typical symptoms: ACL injuries usually present an unstable knee with a extensive swelling and intense pain on walking (this will obviously vary with degree of injury).

Knee injuries are common in demanding sporting activities and one of the most common injuries is the anterior cruciate ligament (or ACL). It is estimated that roughly 70% of ACL injuries occur, not necessarily by contact, but by sudden deceleration combined with pivoting or by a sidestepping manoeuvre, or by an awkward uncontrolled landing. 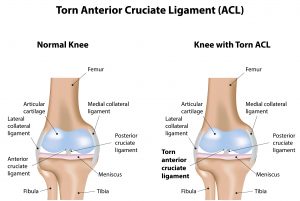 The bony structures of the knee comprise the femur (thigh bone) and tibia (shin bone), which act like a simple hinge, and a third small bone called the patella (or knee cap). The femur and tibia are held in place by four main ligaments. Two of these are the collateral ligaments (medial and lateral), the third is the posterior cruciate ligament (PCL), with the ACL being the fourth. The ACL runs diagonally in the middle of the knee, preventing the tibia from sliding out in front of the femur, as well as providing rotational stability to the knee.

Often ACL injuries will occur in combination with damage to other structures: the meniscus (shock absorber in the knee) in 50% of cases, the collateral ligaments in 30% of cases, and the articular cartilage in the joint (also roughly 30%). One of the worst injuries is termed the ‘unhappy triad’, common in footballers or skiers, where injury is sustained to the ACL, medial collateral ligament and meniscus.

Minor ACL tears have a relatively good outcome and may require up to three months of careful rehabilitation, although careful continued monitoring is required in order to assess knee stability.

Complete ACL ruptures or larger tears have a less favourable outcome and probably require surgical reconstruction. The damaged ACL will be replaced by an auto-graft (i.e coming from the patient) from another tendon in the body (hamstring or quadriceps tendon, for instance). Following the operation post-operative care is essential. The patient’s proprioception and control of the limb must be restored through exercises designed to improve neuromuscular control.

Typical symptoms: Pain at the side of the knee with swelling, and possible instability with a severe sprain. 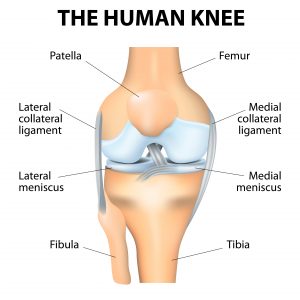 These ligaments can be strained as either a Grade 1 (slightly stretched but still stable), Grade 2 (becomes loose) or Grade 3 (complete tear with an unstable knee). Injuries to the collateral ligaments are usually caused by a force that pushes the knee sideways. These are often contact injuries, but not always. Collateral ligament injuries will result in pain at the side of the knee, swelling at the site of injury and a degree of instability depending on the severity.

In the case of a mild injury, the only treatment required may be wearing a compression bandage to support the knee. In the case of more serious injuries, you may be required to wear a splint on the knee for five to six weeks. The splint will allow the knee to be bent or extended, but braces in the splint will prevent the knee from moving from side to side. Injuries to the MCL rarely require surgery. If you have injured just your LCL, treatment is similar to an MCL sprain.

Icing your injury is important in the healing process. The proper way to ice an injury is to use crushed ice directly to the injured area for 15 to 20 minutes at a time, with at least 1 hour between icing sessions. Your knee must be protected from the same sideways force that caused the injury. You may need to change your daily activities to avoid risky movements. We can recommend a brace to protect the injured ligament from stress. We also suggest strengthening exercises. Specific exercises will restore function to your knee and strengthen the leg muscles that support it.

Typical symptoms: Gradual onset of localised pain at the front of the knee that is worse for activity and typically stiff in the morning.

The patella tendon works with the muscles in the front of your thigh (the quadriceps) to straighten your leg. Although anyone can injure the patella tendon, tears are more common among middle-aged people who play running or jumping sports.

When tendons become stressed, they sustain small micro-tears, which encourage inflammatory chemicals and swelling, which can quickly heal if managed appropriately. However, if the load is continually applied to the tendon, the damage occurring in the tendon can exceed the rate of repair. The damage will progressively become worse, causing pain and dysfunction. The result is a tendinopathy or tendinosis.

Signs of patella tendinopathy are:

Recovering from tendinopathy requires patience. With proper care, the knee pain will become less noticeable in about three weeks, but complete healing from tendinitis may require six weeks. In most cases, you can start treating a tendon injury at home.

To get the best results, start these steps right away: