Typical symptoms: Sometimes pain in the shoulder can be referred from somewhere else. Generally with specific shoulder-related conditions moving the shoulder will make your symptoms worse, but with referred pain shoulder you typically have full function.

Our new IDD Therapy programme is effective in treating trapped nerves, is non-invasive (unlike surgery) and is pain-free. IDD Therapy bridges the gap between what manual therapy cannot achieve and surgery. This therapy is the fastest growing therapy for trapped nerves and degenerative disc issues in the UK.

A disc bulge is where the outer wall of the disc bulges out from its normal position. The disc wall is not broken, and the nucleus material is contained inside the disc. As the disc bulges, it may press against nerves directly or the bulge is associated with a loss of disc height and this may lead to impingement of a nerve as it exits the spinal canal though the gap between two vertebrae. 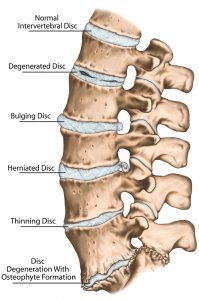 A herniated disc is the same as a prolapsed disc. This is where the nucleus of the disc breaks through the outer disc wall. There will be a loss of disc height as the disc loses pressure and the nucleus material can press directly on to the spinal nerves causing pain. Or the material of the disc nucleus may act as a biochemical irritation to the nerve, in which case the result is the same… pain!

A ‘slipped disc’ is an everyday expression which doesn’t have a true medical definition. It can imply a disc bulge or a herniation, usually a herniation.

The MRI below demonstrates a disc bulge pressing on nerves in the neck. We also took an MRI scan of the same patient before and after IDD Therapy that we offer at the Buxton Osteopathy Clinic. If you look carefully you can see the disc bulge has significantly diminished allowing this person’s symptoms to fully resolve. 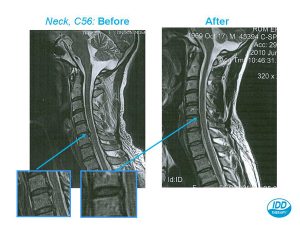 Spinal stenosis refers to a build-up of bony deposits in the vertebrae. It is typically associated with the ageing process. As we get older, in the same way that our skin ages, so too do our discs. Everyone will have degenerative discs to some degree, it goes with the territory unfortunately. 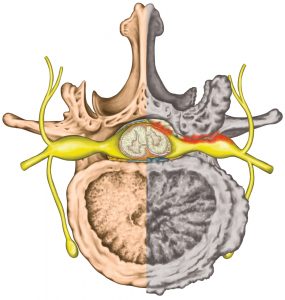 In the spine, facet joints link the vertebrae and are important for preventing excessive rotational and twisting forces which would damage the discs. They also share some of the load-bearing of the spine.

When there is a loss of mobility in the spine, the facet joints bear a greater load than normal. This is particularly the case if there is some imbalance in the body and one side of the spine takes more strain than the other.

Imbalance in weight distribution not only adds to the stress borne by the facets but effectively deteriorates bone and cartilage. Constant movement on these worn structures activates an inflammatory reaction to the joint which is full of nerve endings. The result is chronic pain as the body continuously sends pain signals to the brain.

Just like the vertebra the body reacts to the increased load on the facet joints by laying down more bone in the joint margins (this is called facet joint arthropathy). In some cases, the extra bone can narrow the gap where the nerves exit the spine and if the bone pinches against the bone, it can cause referred pain into the arm.

Disc degeneration is common in the neck (cervical spine) and lower back (lumbar spine). This is because these areas of the spine undergo the most movement and stress, and are subsequently most susceptible to disc degeneration (as these bear much of our weight).

The discs are made of an inner toothpaste-like substance which is mainly comprised of water (nucleus pulposus) that acts lie fluid ball-bearing that is compressible and an outer fibrous wall (anulus fibrosus) made of collagen. 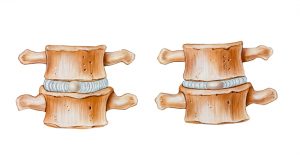 The spongy intervertebral discs absorb shocks and pressure from the load of our bodies and squash as we lean or bend in any direction. They stop the vertebrae rubbing against each other (bone on bone) and they create a space between the vertebrae. This space is very important.

Each vertebra has a hole in the middle and when the vertebrae are stacked on top of one another combine to form a tunnel or canal through which the spinal chord travels down from the brain.

In children, the discs are about 85% water. The discs begin to naturally lose hydration during the ageing process. Some estimates have the disc’s water content typically falling to 70% by the age of 70, but in some people the disc can lose hydration much more quickly (as in the bottom two discs below).

As the disc loses hydration, it offers less cushioning and becomes more prone to cracks and tears. The disc is not able to truly repair itself because it does not have a direct blood supply. As such, a tear in the disc either will not heal or will develop weaker scar tissue that has potential to break again. At the same time as the disc loses moisture and its structural integrity content it will protrude and bulge and can press on nearby nerves.