Frozen shoulder is also known as adhesive capsulitis, and the etiology behind it is mostly unknown. It is difficult to define, diagnose accurately and treat effectively and serves us with what is essentially a biological puzzle.

Research demonstrates that it is more common in females (typically 40-65 years old) or after periods of immobilisation (caused by minor injury, surgery and fracture) and in smokers (smoking is a risk factor in shoulder pain generally). It can also frequently occur for no apparent reason.

There does also appear generally to be a link with metabolic conditions (diabetes, thyroid and cardiovascular conditions) and in such cases it may be a broader symptom of these disorders.

Frozen shoulder is unusual and unique physiologically as the condition does not occur in any other joint. Uppal et al (2015) describe frozen shoulder as ‘an inflammatory contracture of the shoulder reducing the capsular volume and ultimately restricting glenohumeral movements’ .

The images below taken from an arthroscope demonstrate the inflamed joint lining inside the shoulder joint:

The symptoms tend to gradually worsen over several months causing gradual loss of movement and evolving as a constant acute pain especially when initiating movements such as lifting your arm.

Frozen shoulder is known as adhesive capsulitis because there is a loss of volume within the joint capsule as the capsule itself becomes progressively inflamed and thickened. This clearly inhibits the shoulder from moving due to corresponding restriction and pain as the joint capsule is required to move.

The evolution of frozen shoulder usually slowly occurs and resolves over a 12-18months period as demonstrated below. 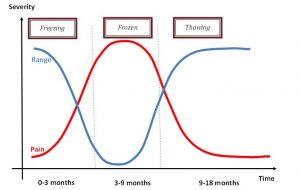 We aim to describe to you what frozen shoulder is and the natural course of progression, including the three stages outlined above. Understanding the condition can assist in reducing some of the fears and frustration that come with frozen shoulder.

Education will also focus on activity modification to encourage functional, pain-free range of shoulder movement, and matching the intensity of stretching to patient’s pain levels.

Management of frozen shoulder utilises various joint mobilisations, soft tissue massage, assisted movements, stretching and exercises. The aims of the techniques are to relieve pain, increase joint range and improve function. These are varied according to the stage of frozen shoulder and the sensitivity of the shoulder joint.

We also aim to describe to you the various options that are available including steroid injection, hydrodilatation, arthroscopic capsular release and manipulation under anaesthesia.

During the frozen and thawing phase management options could include hydrodilatation, followed by more invasive procedures of manipulation under anesthesia, or arthroscopic capsular release. All have been shown to reduce pain and improve function and range of movement. Current evidence has not able to clearly determine if one method is superior to another.

Intra-articular steroid injections are often used during stages 1 or 2 of frozen shoulder. Methylprednisolone acetate or triamcinolone hexacetonide are injected into the joint capsule. The purpose of the injection is to reduce pain and improve shoulder function A study of reviews by Uppal et al (2015) concludes that there maybe a small short-term benefit

Hydrodilatation, otherwise known as distension arthrography, uses the injection of fluid (often saline and or steroids) into the joint capsule, under local anaesthetic. The injection occurs at a high pressure, this causes the joint capsule to stretch subsequently allowing the shoulder more movement. A systematic review by Uppal  et al (2015 concluded that hydrodilatation is an effective technique for short-term improvements in pain, range of movement and function, but there is no good evidence to suggest any superiority to other treatments. These findings support that of a previous Cochrane review by Buchbinder and colleagues in 2008.

An arthroscopic capsular release is a procedure performed during phase 2 (frozen) of frozen shoulder under general anaesthesia by an orthopaedic surgeon. Portals (keyholes) are made through the front and the back of the shoulder, diagnosis is confirmed by arthroscopy and following this, part of the synovium (membrane lining the joint) and the tightened joint capsule are released using diathermy. The procedure enables greater freedom of movement of the glenohumeral joint.Evidence demonstrates that arthroscopic capsular can provide a improvement in reported shoulder function (refer Smith et al., 2014).

For phase 2 (frozen) or 3 (thawing) of frozen shoulder, this surgical technique requires a general anaesthetic. The shoulder joint is then manipulated to improve shoulder movement. There are risks with this procedure including, humeral fracture, joint dislocation and rotator cuff tears, brachial plexus injuries, labral tears and haematomas. A 2013 systematic review (13) identified research comparing MUA to arthroscopic release. It concluded that the quality of evidence available is low and to date capsular release demonstrates little benefit instead of, or in addition to, an MUA.