Typical symptoms: Lower back, hip and groin pain that can range from sharp shooting pains to dull aches that often worsen for activity.

During pregnancy hormones are released that allow ligaments to relax. This happens as the body prepares itself for childbirth. The relaxation of the ligaments holding the sacroiliac joints together is an important part of this process as it allows for the increased motion in the pelvis that is necessary for passage and delivery of your baby. 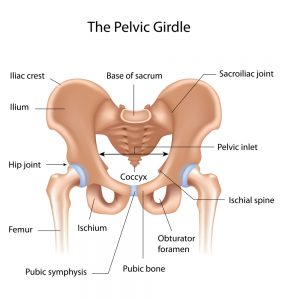 The pelvis comprises two large bones called ilia and a smaller triangular shaped bone called the sacrum. The sacroiliac (SI) joints are formed by the connection of the sacrum and the iliac bones. While the vertebral joints in the spine have some freedom of movement, the sacrum is very different as it is made up of five vertebrae that are firmly fused together as one bony structure. 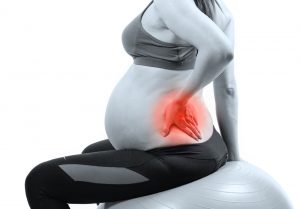 The sacrum joins and moves with the iliac bones and it is held together by an extensive collection of strong ligaments to form the sacroiliac joints (or SI joints).

The SI joint is designed to be a stress-relieving joint to absorb the forces generated during our gait cycle when we walk. They are essentially required to support the entire weight of the upper body as we weight bear and walk around. The heavy workload imposed during pregnancy causes extra strain on these joints and ligaments. The combination of the ligaments becoming progressively lax and increasing load on the pelvis through the later stages of pregnancy can cause irritation to strong ligaments surrounding the SI joint and this will often be perceived as lower back pain.

Osteopathy can be very helpful for SI joint issues. An osteopath can also teach various stretching or stabilising exercises that can help reduce the pain.