Particle Physics is a bit of a departure from my diet and nutrition-based pieces that I have written in recent weeks. However, physics does underpin many techniques and technologies that are used for both diagnosis and treatment of a variety of diseases. Discoveries from basic physics research have been closely linked to medicine for centuries, and numerous tools developed by physicists to pursue their scientific goals have found their way into hospitals around the world. This year there are also a few anniversaries worth celebrating that are landmark events in physics. This year is the 50th anniversary of Apollo 11 landing on the moon. This Apollo mission, at the time, represented a huge milestone in scientific achievement. It led to new understandings of the laws of motion and gravity, also chemistry and propulsion. Technological progress is indeed rapid as the periodic table was only devised 70 years before we landed on the moon. The periodic table was invented by Dmitrii Mendeleevin (in 1869) who identified the guiding principle for classifying elements, one of the grandest accomplishments in the history of chemistry. Our exploits are more remarkable still when you stop to consider that Leonardo da Vinci (who died in 1519) only formulated the very basic ideas about power and force that became cornerstones of modern physics 500 years before. In 2019 meanwhile, in terms of physics at least, we are beginning to understand how little we know. We still don’t have any real answers to the question that has puzzled famous physicists such as the Albert Einstein.  This is of course the small matter of ‘how does the universe work?’. We can only account for 4% of the mass of the universe (the other 96% proverbially appears to have fallen down the back of the sofa!).

The Background behind the European Organisation for Nuclear Research (or CERN)

The European Organization for Nuclear Research, also known as CERN, is hopefully key to answering this huge question. CERN in funded by 23 member states and we the UK contributes £140 million per year (and ‘yes’ Boris Johnson was part of this decision!). While we could grumble about this, there is a lot to like about CERN as it is meant to do just one thing: increase human knowledge of the universe. The scientists that work there have no motive beyond increasing knowledge itself, this is truly altruistic and is, in its very essence, ‘pure research’ (they have never taken any patents). In its pursuit of some of the answers CERN has already spawned notable advances not just in particle physics but other  technologies too. One technology that evolved from CERN was internet technology. In 1989, a scientist named Tim Berners-Lee proposed the creation of a distributed information system that evolved into the world wide web. This is undoubtedly a revolutionary contribution to humanity’s ability to communicate. Think of the value attached to this discovery. Some the knowledge acquired in particle physics has also been applied to medical healthcare for treating diseases such as cancer. Before I move onto this it is just worth mentioning a new initiative that is happening at CERN. No doubt this will also lead to more spin off technologies. 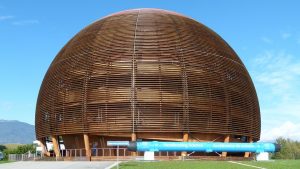 In order to attempt to address fundamental questions about how the universe works CERN is about to have an important upgrade. CERN is already the world’s largest particle physics laboratory. It already uses some of the world’s most advanced equipment on a truly epic scale which most of us are aware of. The Large Hadron Collider (or LHC) is a 17-mile circular tunnel that runs 300 feet below the surface at the French-Swiss border. CERN and the LHC are of course famous for discovering the Higgs boson on 4th July 2012 which led to the Nobel prize in physics being awarded François Englert and Peter Higgs in October 2013. The structure is so large it even flexes depending on the phases of the moon. This must be considered during operation and compensated for by arrays of magnets that use superconductivity (at -273C) to help to bend the stream of particles through the tunnel! No wonder their electricity bill is £18.5 million per year! However, CERN now has plans for an even bigger particle accelerator that will be 60 miles long, at a cost of £20 billion, that should be in operation by 2050. So, what is the point of this? The basic idea is to search for dark matter and dark energy which make up the remainder of the universe that is so far unaccounted for. This takes us to a very interesting place. However, before I get carried away how have some the evolved technologies translated to healthcare. 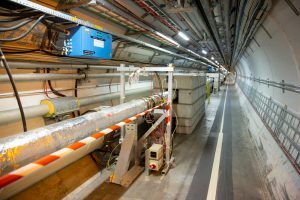 One of these exciting technologies has been used by a company called MARS Bioimaging to take colour see-through images of body parts. This uses accelerated particles to produce first three-dimensional colour images of the human body. The hybrid pixel detector technology, which was used in the Large Hadron Collider to track accelerated particles, produces the first three-dimensional colour images of the human body.  Researchers have already used Medipix to image cancerous tissue, bones and joints and the blood supply to the heart. In the case of a fracture, it shows physical damage to a bone and reveal trauma to surrounding tissue and reveal if blood and nerve supply is compromised. Thus, the technology is scaling up rapidly, and holds incredible promise. 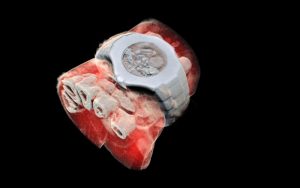 Another application that has developed mainly from CERN is cancer treatment. Innovative ideas and technologies originating from particle physics have been playing an increasingly important role in medicine over the last 100 years since the advent of radiation-based medical diagnosis and treatment. Nowadays, state-of-the-art techniques derived from particle accelerators such as the LHC are routinely used in clinical practice and medical research centres: from technology for Positron Emission Tomography (PET) scanners, to machines used for cancer therapy.

The use of beams of protons or ions to kill tumours is beginning to transform the global cancer therapy scene. Cancer is of course a critical societal issue. The growing economic burden imposed by cancer is putting considerable pressure on public healthcare budgets. In 2018 an estimated 318,000 people in the UK were diagnosed with cancer, with an overall cost for cancer care of £9.4 billion across NHS, private and voluntary sectors. By 2021 the number of new cancer cases is predicted to rise to 383,000 per year at an increased cost of care of £15.3 billion.

Radiotherapy, in which ionising radiation is used to control or kill malignant cells, is a fundamental component of effective cancer treatment. The projected rise in cancer cases will place increased demand on already scarce radiotherapy services worldwide, particularly in less developed countries. Advanced cancer therapy techniques based on beams of protons or ions are among several tools that are expected to play a much more significant role in the future. 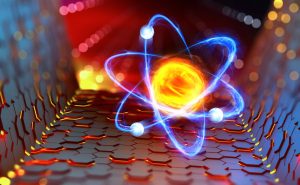 The main goal of radiotherapy is to maximise the damage to the tumour while minimising the damage to the surrounding healthy tissue, thereby reducing acute and late side effects. Hadron or particle therapy is a precise form of radiotherapy that uses charged particles instead of X-rays, to deliver a dose of radiotherapy to patients. Radiation therapy with hadrons or particles (protons and other light ions) offers several advantages over X-rays: not only do hadrons and particles deposit most of their energy at the end of their range, but particle beams can be shaped with great precision. This allows for more accurate treatment of the tumour, destroying the cancer cells more precisely with minimal damage to surrounding tissue. Radiotherapy using the unique physical and radio-biological properties of charged hadrons, also allows highly effective treatment on various kinds of tumours, in particular those that are radio resistant.

Over the past two decades, particle-beam cancer therapy has gained huge momentum. Many new centres have been built, and many more are under construction (figure 2). At the end of 2016 there were 67 centres in operation worldwide and another 63 are in construction or in the planning stage. Most of these are proton centres: 25 in US (protons only); 19 in Europe (three dual centres); 15 in Japan (four carbon and one dual); three (one carbon and one dual) in China; and four in other parts of the world. By 2021 there will be 130 centres operating in nearly 30 countries.

At the end of 2007, 61,855 patients had been treated (53,818 with protons and 4,450 with carbon ions). At the end of 2016 the number had grown to 168,000 (145,000 with protons and 23,000 with carbon ions). This is due primarily to the greater availability of dedicated centres able to meet the growing demand for this form of radiotherapy, and most probably in future it will have a larger growth rate, with an increase of the patient throughput per centre.