Last week we talked about why, in terms of epidemiology, lower back pain is an increasing phenomenon. The context of our daily routine can suddenly become much harder as many of us know when we feel that sudden jolt of pain in our lower backs when we perform an ambitious task. It is just part of life’s rich tapestry.

Putting socks on, getting off the sofa, operating your clutch pedal, even getting out of bed in the morning all become part of a process that involves a severe loss of dignity. 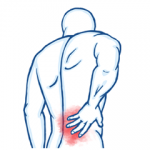 This is becoming more of common occurrence as the age profile of our population increases in league with our waistlines. A 2017 survey, found that 28.7% of adults in the UK are obese and a further 35.6% are overweight, making a total of 64.3% of us who are upscaling our trouser sizes. This comes as no surprise. One in four adults in the UK now do less than 30 minutes of physical activity per week.

All these relationships form a negative feedback loop that conspires against us. The total sum of this equation means that more of us are in pain. Although only a small minority of lower back pain sufferers eventually require surgery the statistics tell a story. Between 2003-2011 surgical procedures for lower back pain almost doubled from 24.5 to 48.83 per 100,000 people in the UK and they are still increasing.

This week I am outlining the most common spinal surgery procedures performed in hospitals. These are decompression surgeries (or laminectomies) and spinal fusions. Within the NHS, spinal surgery is the largest single component of expenditure for the management of lower back pain, with direct costs estimated to be over £1.6 billion per year.

History of Spinal Surgery and Laminectomies

The history of spinal surgery almost certainly goes back to ancient civilizations. Where else would it begin? We can of course always rely on the Egyptians, the Greeks, and the Romans for any useful information before we all fell into the abyss of the Dark Ages. It is easy to imagine curiosities being aroused through injuries of war or falls from horseback.

The Egyptians of course were great at writing thing down. An example is the Smith Papyrus from 1650 B.C. which mentions dislocated vertebra and loss of feeling in arms and legs. 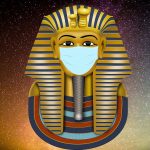 This demonstrates the beginnings of understanding of the correlation between the spine and subsequent neurological problems. The Greeks meanwhile were renowned for philosophy and early scientific investigation.

As one would expect the gold medal goes to Hippocrates who was born in 460 B.C. Hippocrates noted that sciatic pain mainly affected men aged 40-60 years and that in younger men it usually lasted 40 days.

He also performed autopsies on warriors who died in battle and undertook animal dissections. After Hippocrates comes our Roman. Galen’s anatomical studies in 200 A.D. described 24 vertebrae and then nothing much happened as we squabbled and battled, either between ourselves or with others, over the next 1500 years!

In the 1800’s the first early attempts of spinal surgery were performed which does sound somewhat intimidating as these would have not be performed under sterile conditions or with any form of anaesthesia (that had to hurt!). Mortalities were unsurprisingly frequent! The only procedure attempted at the time was a laminectomy which was a way of decompressing the spine.

This is a surgery that essentially creates space by removing part of the arch that surrounds and protects the back of the spinal cord. This is performed by removing the bones called the lamina (seen in the picture above), thus enlarging your spinal canal to relieve pressure on the spinal cord or nerves.

Today it is still one of the most procedures although clearly significantly more refined and performed under aseptic conditions. And yes, it is even done with analgesia! 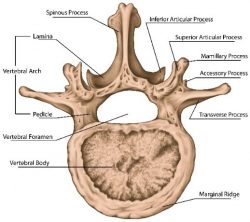 The main reasons for laminectomies are because of pressure on the spinal cord caused by a complex of bony overgrowths called osteophytes, a thickening of spinal ligaments combined with disc and joint degeneration. This usually affects 8-11% of people over the age of 50 years old. It is part of the normal ageing process although in some people the process can be much more pronounced.

For these people, the compression on the spinal cord (termed central stenosis) makes walking difficult and typically they can only progress for short distances before being forced to rest.

There is also usually progressive numbness, pain and cramping in both legs. Conservative measures are unlikely to be successful as people are unable to be active at this stage and surgery is typically the best option for a long-term solution.

The diagram below shows six spinal segments, the bottom segment demonstrates the lack of definition along the lower margins of the vertebra. These roughened margins are osteophytes and these bony protrusion act as space occupying lesions causing impingement on any neighbouring structures albeit the spinal cord (central stenosis as we have described) or departing nerve roots (lateral stenosis) often causing painful conditions like sciatica. 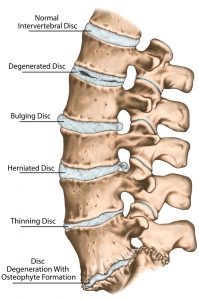 Laminectomies were the only procedures performed for at least 100 years until new technologies and techniques were developed. A watershed moment of course came when the X-Ray was invented by Wilhelm Roentgen in 1885 which meant we could view bony structures in our bodies, and this must have been a truly remarkable advancement. This would have led to huge benefits in terms of understanding the anatomy of the spine.

However, the rehabilitation time was often a little more protracted because to the get to lamina, a large incision was required to move muscles out of the way. As time has moved on so has the surgery. There is now a significant reduction in trauma to soft tissues and the least amount of bone is carefully removed from the lamina.

The procedure today is normally performed as a minimally invasive procedure using a laparascope (a small camera) to guide surgery so there is minimum disturbance to surrounding local tissues, this improves outcomes at the same time.

Minimally invasive procedures are quicker, safer with less recovery times and rehabilitation. Smaller incisions lead to better cosmetic results, there is less blood loss and a decreasing risk of infection

Minimally invasive procedures have become possible because of advances in technology. The invention of MRI (magnetic resonance imaging) which most of us have heard of, has become a vital tool for diagnosing cancer, many musculoskeletal conditions and diseases of the central nervous system. 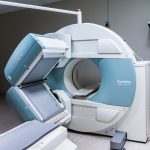 MRI is a relatively new technology (1980’s) and in fact it was only in 2003 that Paul Lauterbur, the director of the Biomedical Imaging Centre at the University of Illinois, and Sir Peter Mansfield, a physicist at the University of Nottingham in Britain, received the Nobel prize in medicine for making discoveries that “led to the development of modern magnetic-resonance imaging”..

Decompressive surgeries may also involve spinal fusions at the same time. This is what it sounds like and basically two or more vertebra are fused together by placing an additional section of bone between them. Bone is usually taken from somewhere else in the body or a synthetic bone substitute is used. The vertebra can also be stabilised using screws or rods.

This stabilises the vertebra and prevents any excessive movements, thus helping to prevent the irritation of nerves. Spinal fusion surgery is an established and widely adopted procedure.

Next week we will review discectomies which is procedure that often runs along side the two procedures.