This is my last piece before half-term (that went quickly!). Winston Churchill’s most famous quote was ‘democracy is the worst form of government except for all others’. Following November’s landslide election win by Ms Aung Suu Kyi’s National League for Democracy (NLD) party in Myanmar it is difficult to witness the fact that the country is once again under military rule. Aung Suu Kyi spent nearly 15 years in detention between 1989 and 2010.

She was internationally hailed as a beacon of democracy and received the Nobel Peace Prize in 1991 (although since then she has proven a controversial figure when she openly supported the mass genocide of Rohingya Muslim communities).

And then there is the detention and imprisonment of anti-corruption campaigner Alexei Navalny who is the most prominent face of Russian opposition to President Vladimir Putin. He is the leader of the Russia of the Future party and the founder of the Anti-Corruption Foundation (FBK). Navalny has more than six million YouTube subscribers and more than two million Twitter followers.  This reminds me of the old joke about Vladimir Putin about his approval ratings going up to 80% (the other 20% are missing) and the one about his favourite song (‘Crimea River’ as in ‘Cry me a River’). 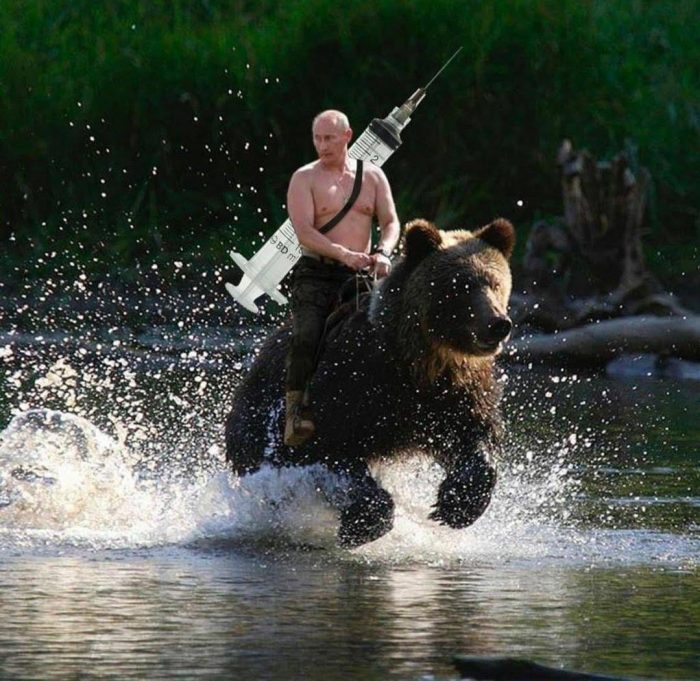 The development of the Russian Sputnik V vaccine has been internationally widely heavily criticised for unseemly haste, cutting corners, and with an absence of transparency.  As it transpires these doubts were unjustified. Despite intense scepticism the results for Sputnik 5 were finally published in the ‘Lancet’ this week. The results demonstrate a clear scientific principle which means another vaccine can now join the fight to reduce the incidence of COVID-19. Vaccine efficacy of Sputnik 5 in Phase 3 trials involved 20,000 participants which was based on the numbers of confirmed COVID-19 cases from 21 days after the first dose of vaccine, was reported as 91·6%.

I am not overly keen on writing another article about COVID-19 because we are all totally saturated with information. However, at the clinic we have been asked a lot of questions about the South African variant (B.1.351). COVID-19 it would seem is undertaking some evolutionary genetic shuffling (or escape mutations) in response to our best efforts.

Clearly there is cause for concern at the time of writing as the UK has launched a surge testing programme to detect the variant after it became obvious that several cases could not be linked to travel or an obvious source of infection. Hence, we began house-by-house COVID-19 testing in various communities to trace B.1.351 before it spreads widely and undermines our nationwide vaccination programme.

Meanwhile rollout of the Oxford-AstraZeneca vaccine in South Africa has been paused after a study in 2000 healthy and young volunteers reported that it did not protect against mild and moderate disease caused by the B.1.351. What of the other approved first wave vaccines and soon to be approved second wave vaccines?

Pfizer announced that neutralisation of B.1.351 was slightly lower with its vaccine BNT162b2 when compared to other mutations although they believe it will not lead to ‘a significant reduction’ of the jab’s effectiveness. The Johnson & Johnson vaccine (JNJ-78436735 or Ad26.COV2.S) found that its one-shot vaccine had an overall efficacy rate of 72% against existing forms of COVID-19 but this was reduced to 57% against B.1.351. 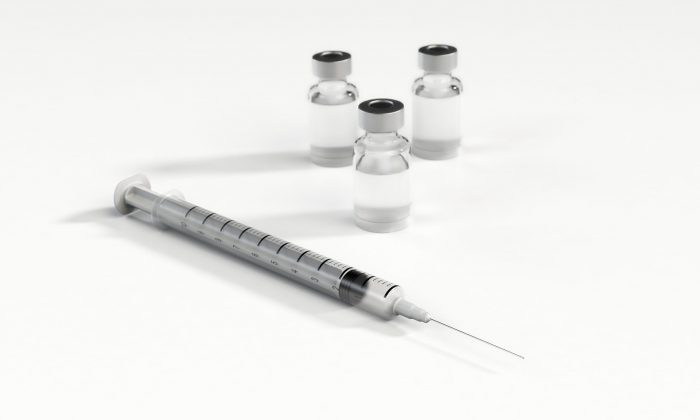 Moderna reported that their vaccine ( mRNA-1273) was six times weaker against B.1.351 and Novavax saw its NVX-CoV2373 vaccine efficacy drop from 90% to 60%. Moderna said that out of caution, the company had started work on a ‘booster’ vaccine dose against the South African variant, which could potentially be added to the two-dose series for the existing vaccine.

So why is the South African variant so distinctive?

In general, the continued widespread transmission of COVID-19 in many parts of the world creates the conditions for significant virus evolution. Surprisingly COVID-19 is no Ferrari in the world of viruses when it comes to mutations. It is estimated that its  genome acquires around two single-letter mutations a month to the 30,000 letters in its genomic code. This is a rate around half as fast as influenza and one-quarter the rate of HIV.

The South African variant emerged after the first epidemic wave in a heavily infected metropolitan area, Nelson Mandela Bay, located on the coast of the Eastern Cape Province. It then spread rapidly, becoming within weeks the dominant lineage in the Eastern Cape and Western Cape Provinces (suggesting it may be associated with increased transmissibility). Further studies found it to be 50% more transmissible than earlier strains of COVID-19.

Now, South African officials are finding the variant in more than 90% of samples from COVID-19 patients that undergo genetic sequencing. The variant has since shown up in at least 32 other countries.

We now know that B.1.351 is characterised by eight mutations in its spike protein, including three at important places in the receptor-binding domain (K417N, E484K and N501Y) that may influence how it binds to receptors and infects human cells. The mutation that it is most concerning is specifically the E484K mutation (this has also occurred in the Brazilian variant B.1.1.28).

E484K is called an ‘escape’ mutation because it helps the virus slip past the body’s immune defences and thus also impacts on vaccine efficiency. Essentially, the mutation makes it more difficult for antibodies to stick to the viral protein spike.

One of the most concerning features of the spike protein of COVID-19 is how it moves or changes over time during the evolution of the virus. Each COVID-19 virus particle has roughly 26 spikes, each of which is made of three long chains of  proteins. Each of these chains is 1,273 amino acids long and is studded with 23 sugar molecules. Each chain neatly folds into a structure to form the spike ( or to be precise a spike trimer as seen below). 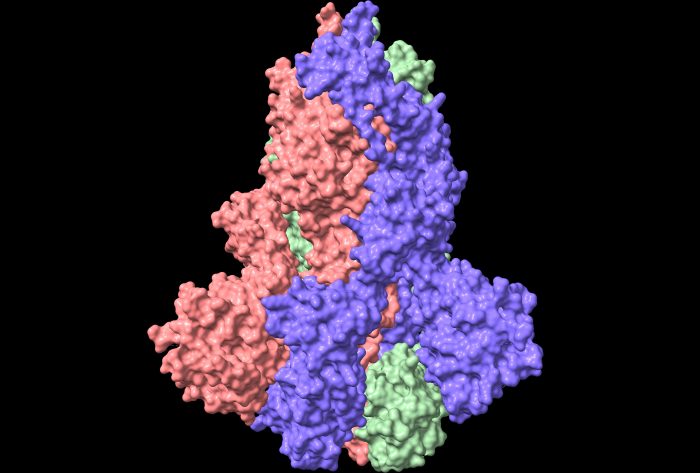 Within all these folds in these three chains are areas that have discrete biological functions. Each has a functional element with a different biochemical purpose such as binding to the target cell and fusing with a target cell membrane. The spike is also involved in other processes such as immune evasion and lending structural stability to the particle. Given these properties it is a great target for a vaccine which is why it is the fundamental focus of most of our vaccines.

Most mutations to the spike proteins may not even be particularly beneficial and could even impede the function of the spike protein or have no overall effect on it. But just a few may cause changes that give the new version of the virus a selective advantage by making it more transmissible or infectious. One way this could possibly occur is through a mutation on a part of the spike protein that prevents protective antibodies from binding to it which is of course what has happened to the South African variant (and the Brazilian variant). Another way would be to make the spikes ‘stickier’ so that they attach to our cells.

In this E484K mutation, an exceedingly small change occurs when just one negatively charged amino acid (glutamic acid) is substituted with a positively charged amino acid (lysine). Scientific analysis of this effect reveals it generates a new site on the spike protein for binding to human cells ACE2, binding which appears to be significantly stronger. This small change also crucially reduced antibody recognition. What is also concerning is that COVID-19 is also acquiring the E484K change in the UK through a process of parallel natural selection and evolution.

On 1st February 2021, Public Health England (PHE) announced that the COVID-19 Genomics (COG-UK) consortium had identified this same E484K mutation in 11 samples from people carrying the UK variant B.1.1.7 – the Kent variant. These 11 samples are likely to be the tip of the iceberg, however, as less than one in 10 samples from people who test positive are sequenced and many people never get tested in the first place. These cases were identified around the Bristol and Liverpool areas.

Variants are a numbers game. Give a virus more bodies and more time to spread, and novel variants are certain to emerge. The good news is that all variants—be they existing or future ones—can in principle be controlled with the same measures.