Oscar Wilde’s views on exercise are quite well known. He famously said, ‘If I could get back my youth, I’d do anything in the world except get up early, take exercise or be respectable.’ A modern-day perspective was given by an unnamed person on twitter who said, ‘my perfect exercise is somewhere between a lunge and a crunch…. I call it lunch’. As it happens ‘sloth’, one of the seven deadly sins,  is something we are programmed to do.

Other primates, such as the great apes, sleep or rest 18 hours a day. We are, it would seem, hard-wired to conserve energy. As  Charles Darwin so clearly articulated  150 years ago, natural selection favours strategies that direct a species’ resources towards survival and reproduction. 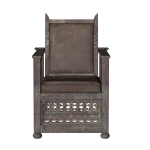 Unfortunately, evolution undertook most of its programming thousands of years ago and it is a little out of date. Our code was written two million years ago with the advent of early hominids in Africa. We evolved at a time when food was scarce, when we only undertook tasks that underpinned Darwinian concepts. In evolutionary terms resting is just as important as exercise, because energy conservation is critical for survival.

It should follow therefore that our bodies are well-adapted to rest whenever possible, sparing resources for future use. However, today the demand for energy expenditure is significantly less but nevertheless, as many epidemiologists will point out (relative to cardiovascular disease, diabetes, and obesity) ‘how could evolution produce an organism that responds so poorly to rest?’

By contrast bears, bats and a handful of other mammals spend their winters in hibernation, showing no ill effects when they wake up as spring arrives. What is it different for humans? We may now at long last have some understanding why this paradox occurs.

Latest research suggests that while evolution favours energy-minimising strategies it is how we rest that is significant compared to our ancestors and other species. Sitting it appears may be worse than just a simple lack of exercise. Standard wisdom states that sitting is bad for us because it is associated with reduced levels of muscle contractions and associated reductions in muscle metabolism.

Evolutionary pressures may favour energy-minimising strategies, but latest new evidence suggests that sitting as a form of inactivity stimulates extraordinarily little muscle activity making it a possible exception to this rule. As it turns out sitting as we do is something we were not programmed to sustain for long periods. Chairs first appeared in the archaeological records less than 5000 years ago and they are a surprisingly recent phenomenon.  We could do with an evolutionary update! 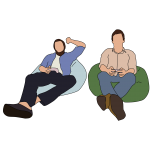 How Much Time Do We spend Sitting?

Screen time accounts for much of our sitting time. Lockdown presented us with a dilemma. Never did we have more time to invest in ourselves. Exercise it seems was not always at the top of the agenda. According to OFCOM, the UK’s communications regulator who monitor TV, radio, and video on-demand sectors, unsurprisingly lockdown brought with it a surge in TV watching and online streaming.

The total amount of time we invested in subscription streaming services doubled in April alone. OFCOM data (called Media Nations 2020) suggested that at the height of lockdown, adults spent an average of six hours and 25 minutes each day staring at screens (or 40% of their waking hours!).

Further details demonstrate that we watched Netflix, Amazon Prime Video and Disney+, for one hour 11 minutes per day, and 12 million people joined a service they had not used previously. Three million of us had never subscribed to any service before.

Our lives are punctuated by commutes to work either on public transport or by car (all of which involves sitting), long hours of work in an office chair, sitting at home for meals, movies, in the pub and computer games (i.e. PlayStation and X-Box as many parents will testify to). In fact, you are probably sat reading this! The pie chart below neatly summarises the amount of time we spend sitting as adults.

Clearly if we could go back in time and compare our modern lives with those of our ancestors, just like H.G.Wells in his novel ‘Time Machine’, it would be useful to see how our lives compare to a non-industrial society. Luckily, we do not have to time travel. Remarkably there are still  hunter-gatherer societies in the world that act as particularly good reference points for us. The Hadza tribe in East Africa represent one of the last hunter-gatherer populations on Earth.

They live on fringes of the  Ngorongoro Crater on the edge of the Great Rift Valley. University of Arizona anthropologist David Raichlen and his collaborators spent several years studying the lifestyle of the Hadza. Their observations provided a glimpse into how our ancestors lived tens of thousands of years ago, and how that way of life may have impacted human evolution, especially regarding exercise and rest. I have previously written about the Hadza in piece entitled ‘How Much Exercise do we Really Need’.

Our unfortunate Hadza tribesmen were therefore subjected to all sorts of modern paraphernalia such as GPS trackers, thigh accelerometers, heart rate monitors and health checks. Heaven knows what they thought! 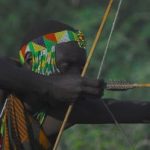 When the researchers screened the Hadza population there appeared to be a very low rate of heart disease. This is consistent with current research where aerobic activity is seen as a key element necessary for a healthy lifestyle. David Raichlen stated; “They (the Hadza) have very low levels of hypertension.

In the U.S., the majority of our population over the age of 60 has hypertension. In the Hadza, it’s 20 to 25 percent, and in terms of blood lipid levels, there’s virtually no evidence that the Hadza people have any kind of blood lipid levels that would put them at risk for cardiovascular disease (or CVD).” What was novel about this body of research is that it also looked at what the Hadza did when they were inactive or what they called ‘non-ambulatory rest’.

As it transpired our hunter-gatherers rested for roughly the same amount of time as we do. Critically however, resting time in hunter-gatherers is often spent in different postures. Comparable their resting postures, such as squatting on their haunches as opposed to sitting on a chair, lead to higher levels of muscle activity. Herein lies the mismatch.

Active Sitting Postures such as Squatting are Better For us

Squatting forces you to keep your body balanced over your feet, requiring between five and ten times as much muscle activity in the legs as sitting in a chair or on the ground, and sometimes even more muscle activation than we would expect from light activity. It transpired that Hadza men and women squatted and knelt nearly one-third of the time when they were inactive.

Putting the evidence together, the research indicated that ‘active resting’ postures, like squatting and kneeling, might maintain enough muscle activity to prevent lipid build up in their blood and avoid disease.

If muscles have no need to support the body, as in chair sitting, research from the University of Missouri proved that this led to a reduction in levels of an enzyme called lipoprotein lipase. This enzyme quite literally hoovers up blood lipids (or triglycerides), which would otherwise provide fuel for muscles, and helps remove them from circulation. Obviously, the hypothesis is that the same thing happens to us when we sit.

In 2018 a study was published in the Journal of Sports Medicine called ‘The Acute Metabolic and Vascular Impact of Interrupting Prolonged Sitting’. This proved that long periods of sitting that are not broken up by periods of light activity led to a build of triglyceride levels. Sitting with light activity such as walking or standing led to a 32% decrease of triglyceride levels.

Squatting as a posture has been adopted for millennia and it is an ancient part of our repertoire. A deep squat flexes the foot upward, pressing the talus (as seen below as the bone shaded in blue), a small bone in the ankle, into the end of the shin bone, or tibia. 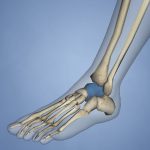 If this is done repeatedly it leaves a mark on the tibia, called a squatting facet. Paleoanthropologists have found these facets on fossils of ancient human ancestors going back nearly 2 million years ago. If our ancestors utilised these more ‘active resting postures’, then the unfortunate negative health effects of sitting make sense. Our physiology was never programmed to experience long periods of quiet muscle activity, so our bodies never evolved a protective response.