We use gold-standard Shockwave Therapy which is one of the most advanced non-surgical and non-invasive treatments available for a wide range of stubborn conditions that are difficult to treat using a conventional treatment approach. Shockwave Therapy will preclude the need for steroid injections and invasive surgeries and enable rapid relief from your pain.

The Achilles tendon is the largest tendon in the human body and has the same tensile strength as mild steel. Despite these amazing facts, it can still be compromised by any activity that involves repeated running, jumping or frequent sudden accelerations or deceleration. 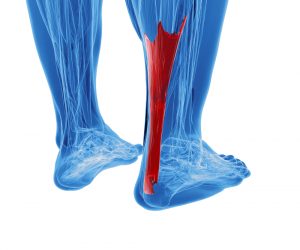 The actual condition itself is thought to be caused by repeated micro-traumas caused by overuse injury. Other issues that are likely to exacerbate the condition include inappropriate footwear, sudden changes in intensity in training, training on gradients and/or poor flexibility.

Shockwave Therapy is one of the most widely-researched rehabilitation modalities, with increasing numbers of scientific studies added each year. The majority of research validates the effectiveness of extracorporeal shockwave, and shows successful treatment rates of up to 90%!

After only 3 or 4 treatments with Shockwave, most patients report a significant reduction of pain and regaining of normal function.

Typical symptoms: A worsening pain on the outside of your ankle that is evident particularly during or after activity. The ankle will also feel unstable and weak.

The two peroneal tendons are located on the outside of your lower leg and enable you to turn your foot outwards (this helps provide stability when you are standing). These two tendons then descend very closely around the outside ankle and attach underneath your foot.

Damage to these tendons can occur traumatically (acute) or through repetitive strain (chronic). The condition is often typically characterised by someone involved in a sport that would generate high demand on the ankles. This scenario would be likely to cause structural changes in the tendons as a response to high loading. This would cause a thickening in the tendon in an attempt to manage the increased demand. Depending on the stage of the tendinopathy, these changes are reversible and often respond well to treatment.